Harold Holzer, whose 53 authored, coauthored, and edited books since 1984 include The Lincoln Image, The Confederate Image, and The Union Image, will publish his next book in August: The Presidents vs. the Press: From the Founding Fathers to Fake News. 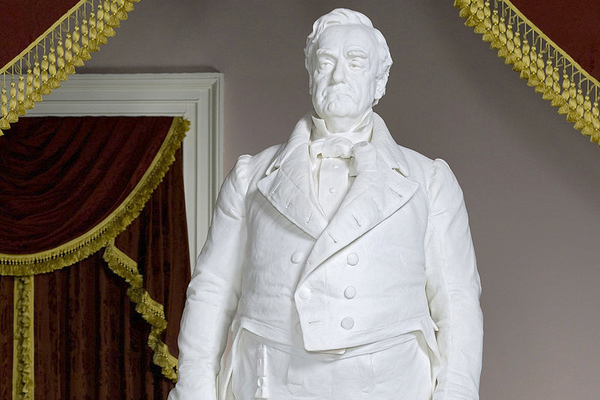 At first glance, the immortal Abraham Lincoln and the largely forgotten Lewis Cass had almost nothing in common save for the fact that they were probably the two homeliest men in 19th-century American politics. Not that their forbidding looks discouraged artists from portraying them, or dissuaded admirers from commissioning visual tributes. Now, the Illinoisan and the Michigander are each at the center of separate efforts in Washington to remove iconic statuary dedicated in their honor.

As to their obvious differences, Lincoln was a southern born, anti-slavery Whig-turned-Republican, and Cass, a New England-born, pro-slavery Democrat. Lincoln was self-educated; Cass studied at the tony Phillips Exeter Academy (where Lincoln later sent his eldest son). Cass commanded regiments during the War of 1812; Lincoln’s sole military experience came as a militia volunteer in the Black Hawk War in Illinois, where, he admitted, he battled only “mesquitoes” [sic]. Cass went on to serve as territorial governor of his adopted Michigan, and later as one of its U. S. Senators. Lincoln turned down his one and only chance to serve as a territorial governor—in remote Oregon—and later lost two Senate bids in Illinois. Cass served as an American diplomat in France; Lincoln never set foot overseas. And Cass helped introduce “Popular Sovereignty,” the controversial doctrine giving white settlers the power to welcome or ban slavery from America’s western territories; Lincoln not only opposed the scheme, its 1854 passage “aroused” him to back into politics after a five-year hiatus. Of course, while Cass failed in his only run for the presidency; Lincoln won twice.

No two Northerners could have been more different—politically. But there was no disguising the fact that neither man was easy on the eyes. That burden they shared.

Seeing Lincoln’s likeness for the first time, the Charleston Mercury branded him “a lank-sided Yankee of the unloveliest and of the dirtiest complexion…a horrid looking wretch.”  Encountering him in the flesh, a British journalist recalled that Lincoln’s skin was so “indented” it looked as if it had been “scarred by vitriol.” Lincoln had no choice but to make light of his appearance. Accused in 1858 of being two-faced, he famously replied: “If I had another face, do you think I would wear this one?” Once he claimed that a hideous-looking woman had aimed a shotgun at him, declaring: “I vowed that if I ever beheld a person uglier than myself I would shoot him.” Lincoln claimed that he replied, “Madam, if I am uglier than you, fire away!”

As for Cass, who came of age politically a generation earlier, his initial biographers politely evaded the subject of his personal appearance—though he possessed a bloodhound face dotted with warts and moles, framed by a meandering reddish-brown wig atop a once-husky frame tending to fat. A tactful 1891 writer conceded only that “where a man of less significant appearance would escape attention…the physical poise and stateliness of Cass would arrest the attention of the heedless.” One mid-century newspaper proved blunter, suggesting of Cass that “it is hard to tell whether he swallowed his meals or his meals him.”

In their time, not surprisingly, both Cass and Lincoln emerged as irresistible targets for caricature. But it is their other, little-remembered artistic connection that comes as a shock. In a significant irony of American art, Lincoln and Cass were each portrayed heroically in marble by the same great sculptor: Daniel Chester French. The colossal, enthroned 1922 statue in the Lincoln Memorial is not only French’s masterpiece, but arguably the most iconic statue in America. Reproduced on coin and currency and featured in movies like Mr. Smith Goes to Washington, it is perhaps most cherished as the backdrop for history-altering events like the “I Have a Dream Speech” that culminated the 1963 March on Washington.

French’s full-figure Cass likeness, carved 30 years earlier for Statuary Hall, has never competed for similar attention or affection, but it did win praise when it was first unveiled in 1889. But in the last few days, some Michigan lawmakers have spearheaded a drive to remove and replace it. “His history is not reflective of our values here,” declared State Senate Democratic leader Jim Ananich on July 10. “I hope that people look at this as a real opportunity to recognize some important people.” (Michigan’s other contribution to Statuary Hall is a figure of Gerald R. Ford). The Cass controversy has erupted amidst a clamor to reappraise Lost Cause monuments throughout the South, and just a few weeks after protestors demanded the de-installation of the long-standing Freedman’s Memorial near Capitol Hill. That 1876 Thomas Ball sculptural group shows the 16th president symbolically lifting a half-naked, enslaved African American from his knees. A copy has already been scheduled for removal in Boston.

In a sense, the Michigan initiative to change its Statuary Hall complement is anything but unique. A few years ago, California swapped out a statue of its long-forgotten statehood advocate Thomas Starr King for one depicting Ronald Reagan. In the wake of the new scrutiny of Lost Cause monuments, Florida recently announced it would replace its longstanding statue of Confederate General Edmund Kirby Smith with one of the African-American educator and civil rights activist Mary McLeod Bethune. The fact that Michigan, too, is beginning to reckon with its conflicted past—Cass (1782-1866) was a slaveholder who also supported Native American removal—demonstrates how thoroughly we have begun conducting a nationwide reappraisal of American memory and memorials.

There is yet one more irony attached to the proposed departure of the Lewis Cass statue: and that is the early history of its distinctive location. Statuary Hall, a favorite of modern visitors to the U.S. Capitol, served originally as the hall of the House of Representatives. In this very chamber, Abraham Lincoln served from 1847 to 1849 in his one and only term as a Congressman from Illinois.

Although freshman Lincoln only occasionally addressed full sessions of the House there, he did rise on July 27, 1848, a few weeks after the Democratic Party nominated the same Lewis Cass to run for president. Whig Lincoln stood firmly behind Zachary Taylor that year. Now he decided it was time not only to offer support for the old general, but a scathing rebuke of Cass.

Lincoln had been known earlier in his career for his caustic wit (one of his sarcastic newspaper articles had once provoked its intended victim to challenge him to a duel). But he had learned over the years to temper the attack-dog side of his oratorical skill set. Cass managed to re-arouse Lincoln’s dormant instincts for venom. Apparently the fact that the Democratic candidate had been re-branded by supporters as a military hero—like Taylor—inspired the 39-year-old Congressman back into the scathing style of his political apprenticeship.

Hastening to point out that he claimed no military glory of his own, Lincoln quickly went after Cass’s claims otherwise. Yes, Lincoln said in his stem-winder, Cass had indeed served decades earlier in the War of 1812, but his principal contribution had been enriching himself. “Gen: Cass is a General of splendidly successful charges,” Lincoln taunted, “—charges to be sure, not upon the public enemy, but upon the public Treasury.”

“I have introduced Gen: Cass’ accounts here chiefly to show the wonderful physical capacities of the man,” Lincoln ridiculed the stout candidate.  “They show that he not only did the labor of several men at the same time; but that he often did it at several places, many of hundreds of miles apart, at the same time… . By all means, make him President, gentlemen. He will feed you bounteously—if—if there is any left after he shall have helped himself.”

Lincoln was just getting started, and one can only imagine his colleagues rolling in the aisles as his onslaught gained steam. No, Lincoln charged, Cass never manfully broke his sword rather than surrender it to the British, as his campaign now boasted. “Perhaps it would be a fair historical compromise to say, if he did not break it, he didn’t do any thing else with it.”

As for Cass’s reported military triumphs north of the border, Lincoln declared tartly: “He invaded Canada without resistance, and he outvaded it without pursuit.” Attaching a military record to Cass, he concluded with a vivid frontier allusion, was “like so many mischievous boys tying a dog to a bladder of beans.”

Emboldened by the reception his assault received on the House floor, Lincoln took his campaign on the road, stumping for Taylor in Pennsylvania, Maryland, Delaware, and Massachusetts. In the end, Taylor won the presidential election handily, but Lincoln apparently lacked Cass’s aptitude for exacting political payback. Ambitious for appointment to the federal Land Office (since his party did not re-nominate him for the House), he ended up disappointed. Offered the Oregon posting as a consolation, he turned it down (in part because his wife refused to move west), returned to his law practice, and for a time disappeared into political hibernation. Only when Stephen A. Douglas re-introduced Popular Sovereignty did Lincoln stage a comeback.

Winning the presidency sixteen years later, Lincoln arrived back in Washington in February 1861, and almost immediately headed to the White House to pay a courtesy call on outgoing president James Buchanan. There he met with Buchanan’s Cabinet. Alas, history did not allow for a face-to-face meeting between the two ugliest men in politics. The elderly Cass had served nearly four years as Buchanan’s Secretary of State, but had resigned back in December. In the ultimate irony, Cass had quit in protest over Buchanan’s reluctance to resupply federal forts in the South at the onset of secession—showing the kind of pro-Union resolve that might have prevented the crisis that Buchanan left Lincoln to handle. Say this much for Cass: he remained loyal to the Union.

That final burst of patriotism may not be enough to save his Statuary Hall effigy. Daniel Chester French’s almost hideously lifelike Cass statue may depart as soon as a replacement can be identified and sculpted. But the Cass masterpiece should definitely be preserved elsewhere—anywhere—for the simple reason that works by the greatest American monumental sculptor deserve to be appreciated on their own terms: as art. At its dedication, critics lauded the French marble as both “an excellent model of the great statesman” and “a statue full of character and expression as well.”

No one has yet mentioned it, but the uncompromisingly realistic Cass statue also testifies usefully to an era in which matinee-idol good looks were not required for political success. In the age before the glare of television and instantaneous photography were relentlessly aimed at our leaders, politicians could succeed even if they looked like Lewis Cass. Or Abraham Lincoln.

There is no evidence as to whether Lewis Cass ever believed his repellent appearance held him back from the White House, or disqualified him from romanticized portraiture. As for Lincoln, regardless of whether or not his statue survives in Lincoln Park in Washington, at least he maintained a sense of humor about his portrayals, while fully understanding how they burnished his image.  And that is why he posed for a succession of sculptors long before Daniel Chester French ever undertook to create the Lincoln Memorial. Shown the very first sculpture made of him from life, he was heard to observe with self-deprecating frankness: “There is the animal himself!”