Daniel Horowitz is the Mary Huggins Gamble Professor of American Studies Emeritus at Smith College, and author of Happier? The History of a Cultural Movement That Aspired to Transform America (Oxford University Press, 2018) and most recently Entertaining Entrepreneurs: Reality TV’s Shark Tank and the American Dream in Uncertain Times (University of North Carolina Press, 2020). 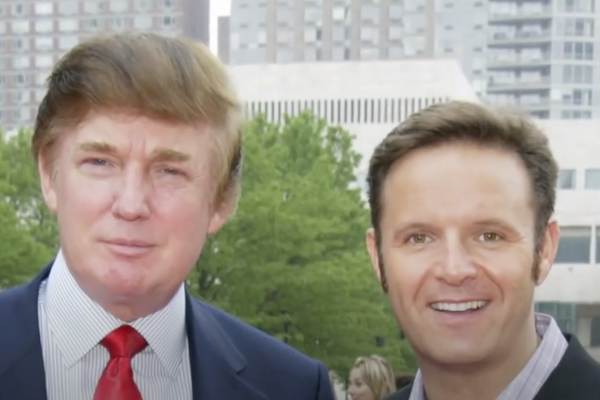 We can now be reasonably sure that we have more accurate information about President Donald J. Trump’s financial situation—that he has often paid remarkably little in taxes, that he is not as successful a businessman as he has frequently claimed, and that he may soon have to come up with money to pay off huge debts. However, as a historian of entrepreneurship, I find the most interesting revelation is that the British-born but self-proclaimed self-made American Mark Burnett rescued Trump when he picked the future president for a starring role on The Apprentice, which launched in 2004. This reality television show followed Burnett’s Survivor (2000- ) but preceded Shark Tank (2009- ).

From a working-class background and without a college education, Burnett arrived in the United States in 1982. He quickly persuaded a wealthy Beverly Hills family to hire him as a nanny, having convinced them that his experience as a member of an elite paratrooper force in Ireland and the Falkland Islands meant they were getting a nanny and security guard all-in-one. A job as a nanny for a second wealthy family, this time in Malibu, enabled him to hone his skills as an apprentice to the household’s head who provided contacts and information and, eventually, a job in his insurance office. That job helped Burnett realize such employment would neither make him rich nor sate his adventuresome restlessness.

A critical element in the narrative of his own life that Burnett has offered was the role Trump played in motivating him. He insisted that reading The Art of the Deal (1987) had inspired him “to jump in, take risks, and pursue a career as an entrepreneur.” Trump returned the favor, not only by agreeing to star in The Apprentice, but also by writing an introduction to Burnett’s Jump In! Even If You Don’t Know How to Swim (2005), which the real estate tycoon described as “the inspirational rags-to-riches story of an American immigrant.” Burnett, he continued, was someone who “transformed hard work and an inspired vision into the realization of the American dream.” The values Burnett promoted in Survivor, The Apprentice, and Shark Tank were ones Burnett and Trump shared. However, though they were reliable in producing successful reality TV programs, they do not work as well in governing a nation in crisis or in sustaining a Hollywood career.

As Ben Smith wrote in the New York Times on October 19th, 2020, “like his greatest creation, Mr. Trump—who sought and then lost an idiotic ratings war on Thursday night with Joe Biden—Mr. Burnett seems to be struggling to keep his grip on the cultural moment.” It has now been almost ten years since Burnett last hit it big. Both of them have done their best to deploy religion to shore up their careers. Recently Trump controversially, and some say cynically, held up a Bible for a photo op at St. John’s Church. In 2013 Burnett produced The Bible for the History Channel, casting his third wife, Roma Downey, as the Virgin Mary. “An earnest but shallow take on the Greatest Story ever Told,” one commentator remarked, “The Bible suffers from leaden pacing and mediocre special effects.”

The selection of Trump as the host of The Apprentice assured Burnett’s success as a television producer but more significantly for the nation and the world helped rescue Trump from an uncertain economic fate and eventually elevated him into the presidency. Burnett had contributed to Barack Obama’s campaign but resisted pressure in late 2016 to release potentially damaging tapes of The Apprentice that ended up on the cutting room floor. During the fall of 2016 Burnett criticized Trump when he remarked that “my wife and I reject the hatred, division and misogyny that has been a very unfortunate part of his campaign.” Once Trump was in the White House, Burnett danced a delicate dance to avoid alienating the president and harming his own brand.

Before Trump began firing people on The Apprentice, his brand, especially outside the world of real estate, was not very valuable. That changed dramatically in the show’s first year, when his appearances brought him almost $12 million, a figure that increased dramatically to almost $48 million in 2005. From that high point, the numbers drifted downward and he may well have launched his successful bid for the presidency not seeking to achieve that high office, but to restore the luster and power of his brand.

Whether or not entrepreneurship can rescue the nation from the intertwined threats of the COVID-19 pandemic, an economic meltdown, and a potentially contested election outcome remains to be seen. So far, it appears that what is needed is less neoliberal self-government in which entrepreneurship plays the central role and more vigorous action by the federal government.

Moreover, it remains to be seen what results Burnett and Trump have wrought. On November 3rd, American voters will have to decide whether Trump will be a survivor or whether they want to say to the apprentice president, “You’re Fired.”